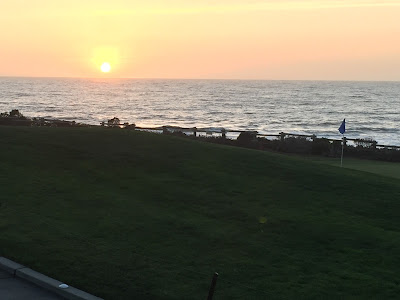 Charles had retired from a very active and lucrative career as a television director to become a tenured professor. In his lifetime, his cameras had been focused on some of the top talent of the entertainment industry—Barbara Streisand, Bette Midler, Robert Redford, John Wayne, and many, many others.
In camera language, there is the wide shot, the medium shot, the close-up, and the extreme close-up. Film is the medium for landscapes—film lives for the wide shot. Majestic landscapes, and wide, expansive plains, are all beautifully shot and presented on film.
Television, conversely, is the medium of the close-up. Soap operas show how two people gaze longingly at each other. Debates and interviews show people looking at each other critically. Television news anchors are made to look more trustworthy because we can look right into their eyes and they look right back at us.
Zooming-in from a medium shot to an extreme close up, there are moments where the composition of the shot is bad. Maybe it looks awkward because it cuts off the subject’s ear, or her nose, or her neck. Most new directors stop a zoom-in at the close-up. The subject’s head is framed nicely from her shoulders to the top of her head, and from ear to ear with a little bit of look space between her eyes and the edge of the screen. It is a safe shot—close, but not too close. It will do in a pinch, and it will let you see the color of the eyes of the subject—and not much else.
Buzz taught his students—insisted, really—that they push past this point, into one of the most awkwardly framed shots that was the most convoluted of compositions. It looked horrible. It made a person uncomfortable just watching it. But Buzz demanded the students zoom-in past that awkward framing to a shot that was even closer—to the point where you could see the subject’s nose flaring, his eyes twitch and look away, the sweat drip down his brow. This was the place where you saw the soul of the subject. Anything wider was merely “looking at” the subject. At this extreme close up, Buzz knew we were now “looking into” the subject, as in the old adage, “the eyes are the window to the soul.”
Buzz had honed his eye to see beyond what the camera saw, into the very soul of the people sitting before him. It was his job and passion—he made sure the camera revealed that true nature of the subject. He taught his students with that same emotion and commitment. It was vitally important to him that no one come out from under his wing without a solid understanding of the moral and ethical responsibility to be true to those subjects. It was important to Buzz that his students know how to identify and, as best they could, reveal their subject’s inner monologue. This required venturing past the safe wide shot through the crappy semi-close shot into the extreme close-up. At that close you could catch a glimpse of the person’s soul.
But how do you teach this sort of sensibility and sensitivity?
Back in the studio, we detangled ourselves from whatever we were doing and filed out. Buzz made a point to close the door and lock it behind us. He walked upstairs to the control room, pulled its door closed, and locked it, too.
“Follow me outside,” he said, and pushed through the outer doors of the College of Creative Arts foyer into the crisp San Francisco air.
We all filed out behind him, wondering what he had in store for us.
“Observe if you will,” he said, with a flourish of his hand toward the sky, “the beautiful sunset. Look at it.”
It was a glorious smog-filled sunset that pulsed dark red hues, rich oranges, with streaks of purple and pink, splattered like a Jackson-Pollock across the blue sky dotted by Rorschach- shaped wisps of clouds. The yellow orb of the sun slowly disappeared behind the hills.
I took a deep breath and tried to take it all in, committing the entire vision to memory. I turned and looked back at Buzz. He was sitting at the edge of a planter and was pulling out a long, tan cigarette.
“Challenge yourself to really see this sunset. Examine it,” he said. “It is right in front of you, but are your eyes really open?”
I blinked incredulously at the deep concept.
“Continue to observe it until I finish this,” he waved the cigarette in the air, “and we will not go back inside until I take the last draw.”
I turned back to engage my being with the sunset to the best of my meager abilities.
Buzz slowly smoked his cigarette, giggling every few minutes at some concept that tickled him. Whether it was the absurdity of his naive students struggling so intently on such a peaceful scene, or some completely unrelated joke he was remembering—even then, he was paradoxically far away and so very, very present.
Do you have a favorite story from a treasured teacher? Share in the comments!
###
Posted by acoven at 6:26 AM