I was asked for some graphics and background of CodeHawgs. I thought I'd include a few more of you so you could take a break from your hectic lives and enjoy a fun historical moment.

Back in 1997 when InDesign 1.0 and its SDK were under construction, we thought it would be clever to come up with a fictional company that you could follow their pursuits as they tried to create a set of plug-ins to help a client integrate their workflow with InDesign.

The original name was CodeDawgs, a fun play on words, since "Who let the dogs out?" was often slurred "Who let the dawgs out?" and was still a popular song. It also was sort of fun to think we're "tearing up code like frothing dogs." Kind of some nice high-throughput connotation. We liked it. We were, after all, geeks, with low humor thresholds.

So I engaged my friend Elena on the Photoshop QE team to do a mockup of a dog for the logo:

In the meantime, we came up with a funny slogan, "Our code smells like roses!":
We started legal on the trademark search to make sure we weren't completely stepping on someone.


Well, this was particularly funny to us geeks with that kinda humor, because the original insult is, "You think you're so good, that your poop smells like roses?" So the phrase "Our code smells like roses!" was a cute play on words to indicate we didn't take ourselves too seriously, since of course our code was going to be crappy sometimes and we never would think we're pristine code writers and could learn nothing from our external developers.

A humility I hope carries through the group to this day.

So I asked Elena to do a mockup of the dog taking a dump and pooping out code, perhaps 0's and 1's? She was confused, she didn't understand what I wanted to see. So I explained to her, "Make it like the 'No bullshit!' bumper sticker!"

"You know, a bull taking a dump with an international 'NO' sign over it?"

She hadn't seen one before, so I quickly drew one up in Photoshop and sent it to her. 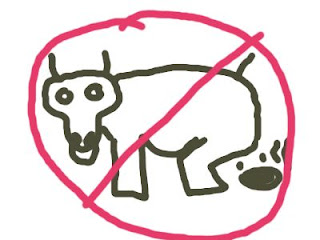 Once she saw that, she understood. And the poopin dog was born: You'll note, she hadn't yet gotten the memo on the trademark (tm) symbol. More on that below.

Legal then got back to me with the inital results of the trademark search. Bad news. There was a software consortium in Cupertino called "CodeDogs", and trademark law indicates spoken similarities are just as important, conflict-wise, as written similarities. So the argument that CodeDawgs was distinct from CodeDogs completely falls apart when spoken. And a software consortium certainly is in the same venue as a software application development company.

So then we talked and came up with a clever alteration--CodeHawgs! Even funnier, because it suggests we're hogging all the code! Again, a play on our, of course, humbler side.

We're nothing, if not humble.

Trademark searches on CodeHawgs came up in the clear. We were good to go! Although, the legal searches always ended with an interesting caveat: Do NOT use (tm) after any "CodeHawgs" icon or name listing. Why? Because, while we didn't want to conflict with any known trademark, there was no one in their right mind that was going to PAY the USD$7,000 to trademark it. I mean, we had budget, but not THAT much budget. It wasn't THAT important.

We DID however grab www.codehawgs.com and www.codehawgs.org. I had hoped that someday we would be able to publish sample code and integration suggestions on a very special, fun section of our adobe web site (such as partners.adobe.com/indesign/sdk/codehawgs or something like that) that the www.codehawgs.com/.org domains would redirect to.

If you do a whois on codehawgs.com you'll see its still owned by Adobe. Unused, but we still got it.

Back to the drawing board Elena went, converting the poopin dog to a poopin pig, with our fancy approved slogan: 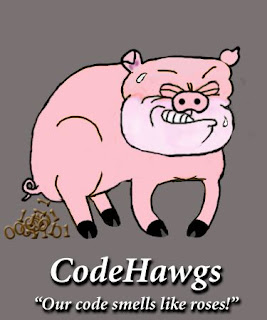 Note the removal of the (tm)'s.

Our current director, being a geek at heart, got a great chuckle out of the whole thing as he amassed the correct budget to put this stuff on hats and jackets (which took over a year. See final note below.) In a moment of clarity, he said to me, "Andy, why don't you run this logo by HR before we imprint it on anything?"

"HR? Why would we need to run anything by HR?" I asked.

Off to HR I went, sending the details of the fictional company and logo and the graphic for, what I thought for sure would undoubtedly be a flippant, quick, dismissive-like approval.

After the HR person was done being completely flabbergasted, and explained to me how engineers aren't allowed to do marketing FOR A REASON, she concluded with the final nail-in-the-coffin remark:

"Scatalogical humor is NEVER appropriate at ANY company."

Hmm. Maybe she just didn't get it?

Dismissed with a sound, spanking-like rejection, we pondered, "Now what do we do?" Fortunately, the movie The Matrix had just come out and we were quite smitten with it.

Of course! NeoPig! A stroke of genious: 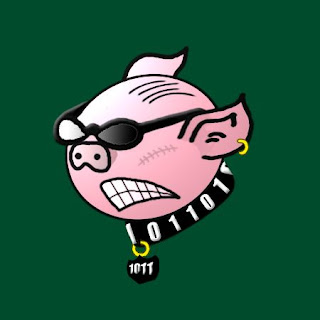 An e-mail and a phone call to Elena, and slap that baby over a green background, to simulate how it'll look on the jackets, and the CodeHawg was truly born.
I've also included the final of the back-jacket art, symbolizing the arduous mountain-climbing-like task it was to get InDesign 1.0 out the door. Elena and I chose to make the person explicitly gender-neutral so that it could be perceived as a male or female, since this was a multi-gender, multi-cultural accomplishment: 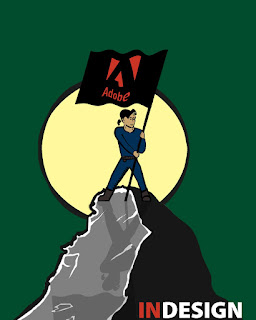 The final note, the jackets, at $300/piece, were the last expensive "Shipping gifts" ever given out by Adobe. Right after we got those, the official "Shipping gifts policy" became $25 per person.

It took exactly 1.25 years, from the moment I started politicking to get the hats and jackets into the budget, to the day the team received these awards with Thank You notes from John and Chuck.

And now you know The Rest Of The Story.